The rebound effect of design alternatives

The graphical presentation of the EVR of a product reveals the fundamental differences between two (or more) alternative designs. Two examples from the automotive industry are shown here to explain the EVR model in further detail, and to explain the “rebound effect” which stems from consumer behaviour.

Fig. 4.3a shows the result of calculations on costs (market value) as well as ecocosts for middle class German cars (Audi) and for European fuel prices 1999. The left hand side of the two lines relate with the production (the end-of-life phase included) of a specific

part of the coach-work of the car. The right hand side of the two lines depicts the effect of the fuel consumption related to that specific part of the coach-work (0.305 litre fuel per 100 km and 100 kg; reduction of weight approx 16 kg).
At a total lifetime of 250,000 km, the solution with SMC (a polymer) is break even with steel from the economic point of view (economic savings on the fuel equal the extra costs of the coach-work),. However, the solution with the polymer coachwork is much better from the environmental point of view.
Note: It is good to mention here that the change in cost structure (from energy costs towards product costs) has a serious impact on the marketing of the product. When the aforementioned example of coach-work is applied to the total car (a hypothetical case), the price of the car will go up with nearly a factor two-and-half, which may only be marketed via total lease concepts (for the total lifetime of the car). Figure 4.3a  The EVR of reduction of the weight of a car

Before the second design alternative is given, the so called rebound effect is explained. See Fig. 4.3b.
The rebound effect has to do with consumer preferences. When eco-costs are reduced by “savings”, the economic value (costs for the consumer) is reduced as well, so the consumer will spent the money somewhere else. In the example of product 1 of slide 4.3b, the net result is positive, since the money which is saved, is spend on another product with a lower EVR. In the example of product 2 of slide 4.3b, however, the net result is negative, since the saved money is spent on a product with a higher EVR.
The conclusion is that “savings of money” are only positive for the environment when the savings are achieved in areas with a high EVR.
A typical example of the rebound effect is related to the efficiency increase of light bulbs: when consumers spend the saved energy on more light (e.g. in their gardens) or on electricity for other domestic appliances, it does not help much in terms of de-linking the economy and the ecology.
In general, savings on energy often have a positive effect in terms of sustainability, since the EVR of energy is relatively high in comparison with other expenditures. However, savings on luxury goods (generally a low EVR because of the high labor content), might be negative since the “rebound” might be in the area of more energy (e.g. in the form of travel, as it has been explained on the page “consumer expenditures”) !!!

The second example: reducing fuel consumption by a better aerodynamic design.
This is an example of the rebound effect in the automotive industry.
On first sight this is a win-win situation since the result is savings in eco-costs (at a high EVR) as well as savings in costs. The rebound effect, however, reduces the positive result in terms of sustainability considerably. See Fig. 4.3c.
Since the consumer preference is to spend a fixed part of the income on (driving) cars, the money saved on fuel is spend again on fuel in a country with no speed limit, like Germany. It results in driving faster, instead of savings on diesel consumption. In The Netherlands, a country with speed limits, the situation is slightly better: it results in driving more. Although “diving more” has a lower EVR than “driving faster” (the EVR of the diesel is higher than the EVR for the car+diesel), the end-result is that there are hardly any savings in eco-costs.

More examples on this issue are given at the page product innovation: eco-efficient value creation. 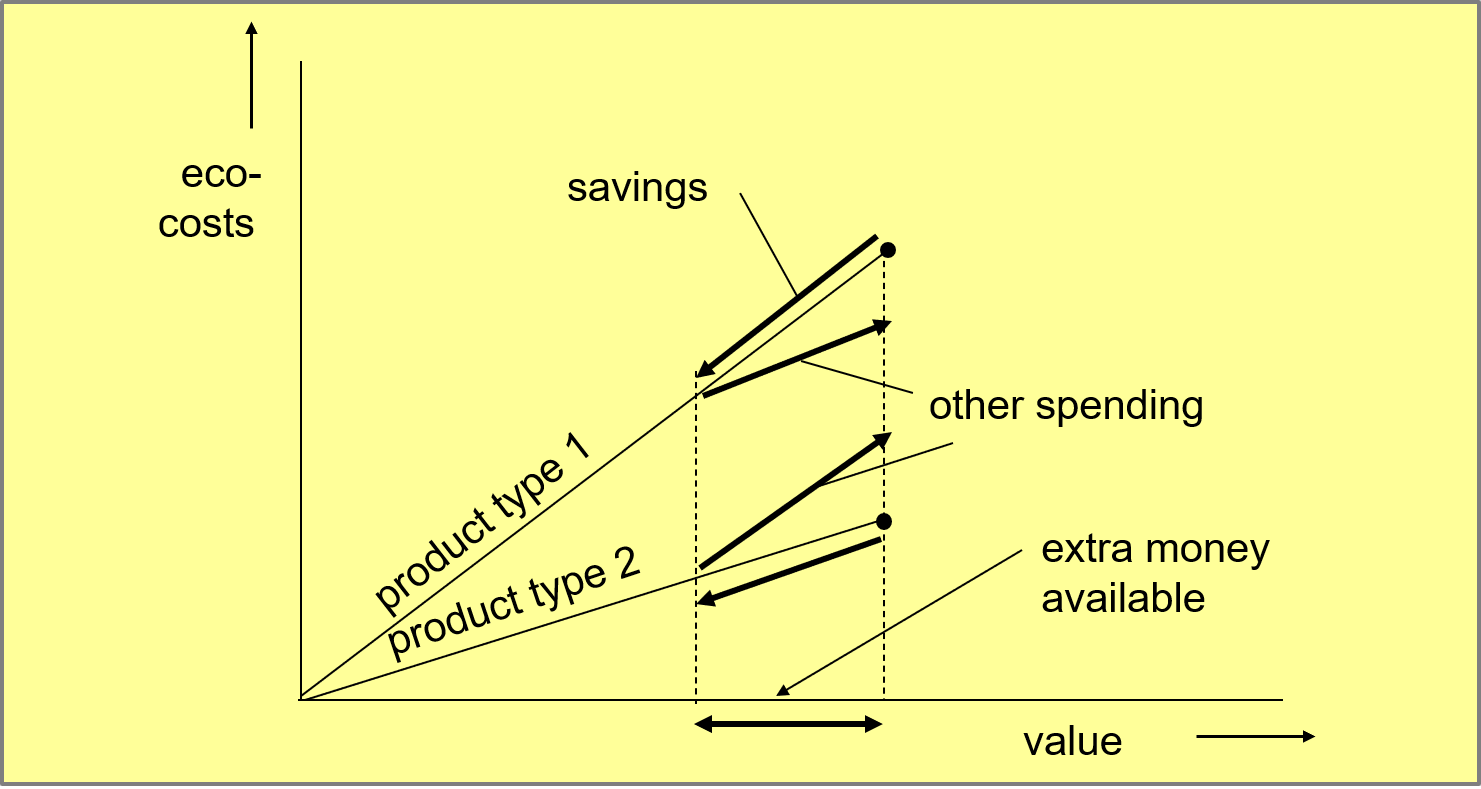 Figure 4.3b  The rebound effect of consumer spending 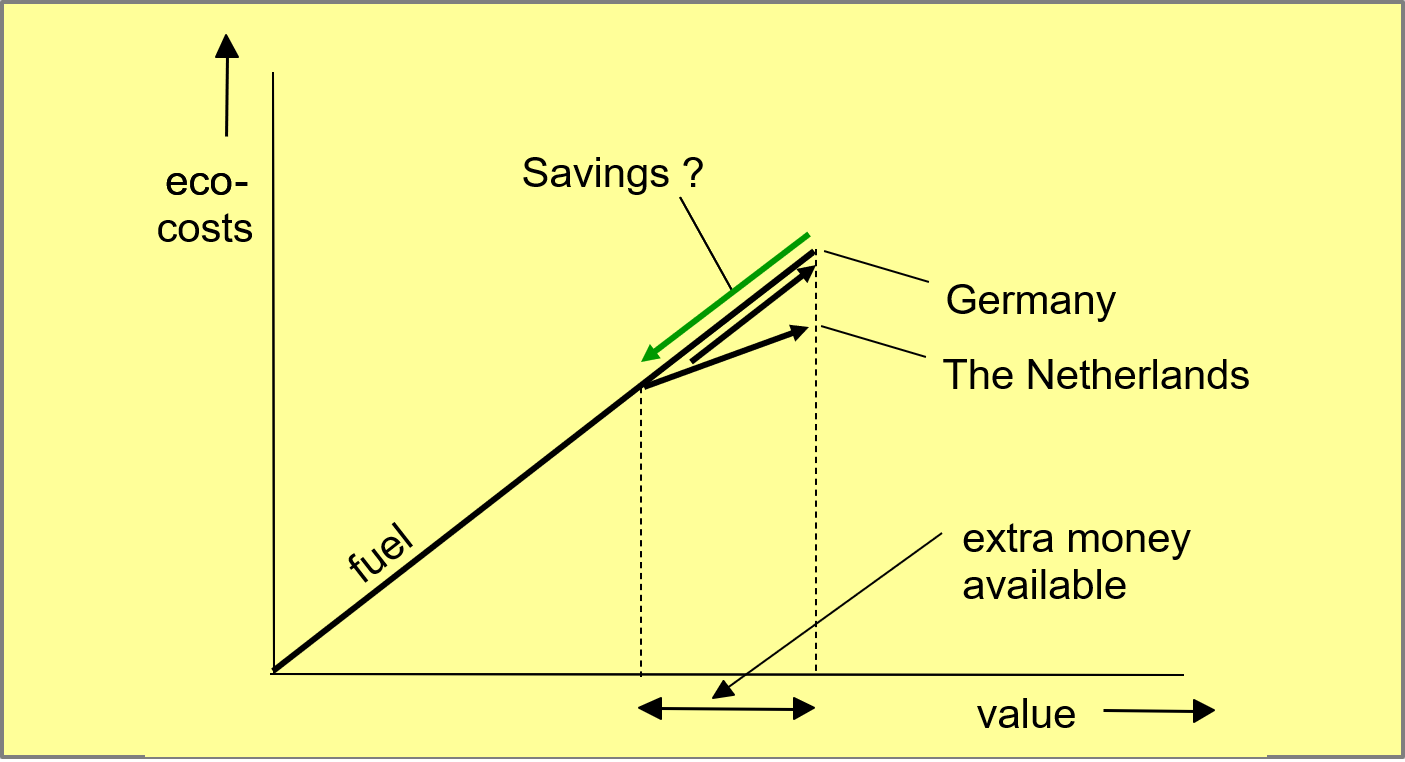 Scheepens AE and Vogtländer JG. Insulation or Smart Temperature Control for Domestic Heating: A Combined Analysis of the Costs, the Eco-Costs, the Customer Perceived Value, and the Rebound Effect of Energy Saving. Sustainability 2018, 10, 3231; doi:10.3390/su10093231